Researchers from Addis Ababa University and BICC (Bonn International Centre of Conflict Studies) investigated the conditions of Eritrean refugees in Ethiopia together. More than 600 people participated in their study in Tigray and Afar Regions as well as in Addis Ababa.

TRAFIG at the “In Dialogue” Symposium organised by Indiana University

On 18/19 March 2022, colleagues involved in the TRAFIG project contribute to Indiana University’s “In Dialogue” Symposium, which focusses on transnational dynamics and repercussions of the movement of displaced peoples between Africa and Europe. In a session on “Constrained transnationalism: Experiences of displacement and ongoing limbo between Africa and Europe” Catherina Wilson (Leiden University), Janemary Ruhundwa (Dignity Kwanza), Benjamin Etzold (BICC), Markus Rudolf (BICC), Simone Christ (formerly BICC) and Pietro Cingolani (FIERI) will share insights from TRAFIG research in Tanzania, Ethiopia, Italy, the Netherlands and Germany. 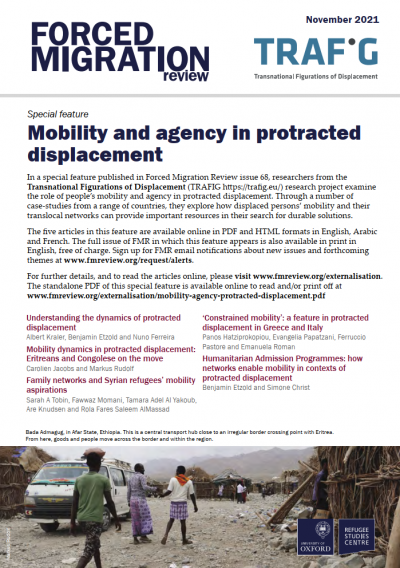 Mobility and agency in protracted displacement

Available in English, French and Arabic

The latest issue of the Forced Migration Review includes a special feature on mobility and agency for those living in protracted displacement, produced in collaboration with the TRAFIG project. Read more 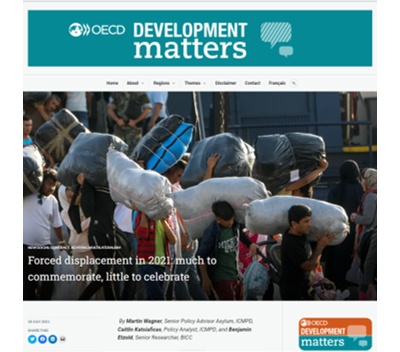 Forced displacement in 2021: much to commemorate, little to celebrate

It is primarily the responsibility of states to provide durable solutions to people in protracted displacement. A state-centred approach, however, risk underestimating or even disregarding the ambitions and capacities of displaced people themselves. In a contribution to the OECD blog series ‘Development matters’ Martin Wagner and Caitlin Katsiaficas (both ICMPD) and Benjamin Etzold (BICC) present some insights on TRAFIG research on the mobility of displaced people in the Middle East and East Africa and the role of networks in their everyday lives. They conclude that many refugees rely first and foremost on their own human, social and financial capital to build a more secure future. 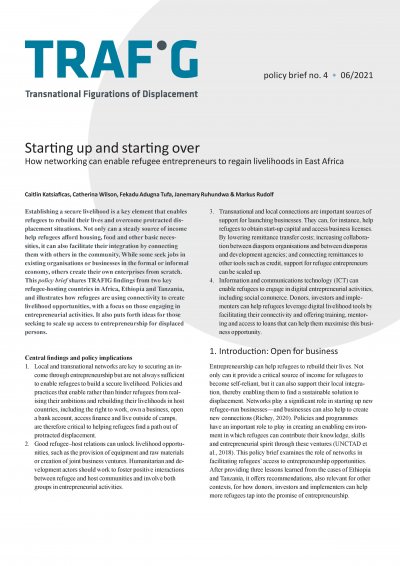 Starting up and starting over

Establishing a secure livelihood is a key element that enables refugees to rebuild their lives and overcome protracted dis placement situations. Not only can a steady source of income help refugees afford housing, food and other basic neces sities, it can also facilitate their integration by connecting them with others in the community. While some seek jobs in existing organisations or businesses in the formal or informal economy, others create their own enterprises from scratch. 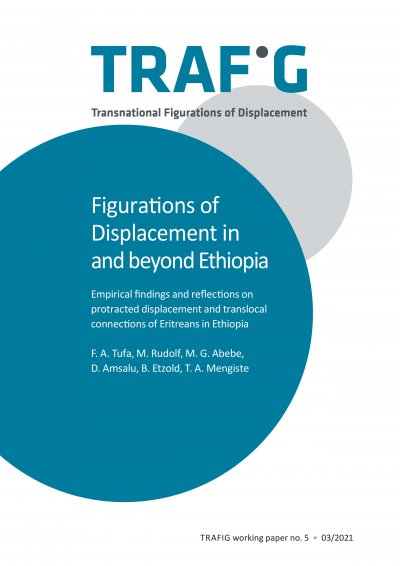 Figurations of Displacement in and beyond Ethiopia

This working paper is based on empirical research on translocal figurations of displacement in Ethiopia. It explores TRAFIG’s central question: “How are protractedness, dependency and vulnerability related to the factors of local and translocal connectivity and mobility, and, in turn, how can connectivity and mobility be utilised to enhance the self-reliance and strengthen the resilience of displaced people?” The paper presents findings from six camps in Tigray and Afar regional states, as well as urban refugees in Addis Ababa and several cities in Tigray.

The findings show that the capability to break free from protr... Read more 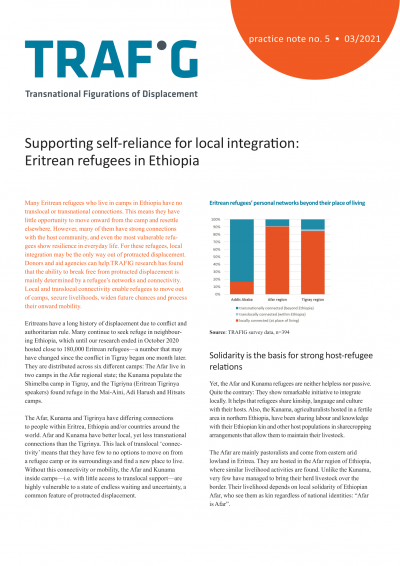 Many Eritrean refugees who live in camps in Ethiopia have no translocal or transnational connections. This means they have little opportunity to move onward from the camp and resettle elsewhere. However, many of them have strong connections with the host community, and even the most vulnerable refugees show resilience in everyday life. For these refugees, local integration may be the only way out of protracted displacement. Donors and aid agencies can help.TRAFIG research has found that the ability to break free from protracted displacement is mainly determined by a refugee’s networks and connectivity. Local and translocal connectivity enable refugees to move out of camps, secure livelihoods, widen future chan... Read more 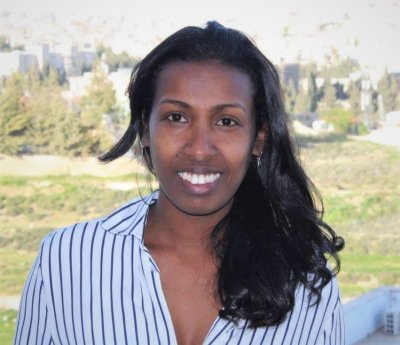 Meet Mulu Getachew Abebe - a member of the TRAFIG research team at the Addis Ababa University, Ethiopia - and find out more about her experience, her motivation and her work in the TRAFIG project.

My name is Mulu Getachew Abebe. I am a PhD candidate in Social Anthropology at Addis Ababa University, where I also did my M.A. I am interested in the broad field of migration and refugee studies, covering the various aspects of social, cultural and political life that affect refugees’ experiences. My work focuses on trans-border migration of Eritrean refugees across the Ethiopian-Eritrean border. Before my admission to the PhD Program, I was working as a social worker in a nongovernmental organization, which tried to raise awareness on risks of human trafficking. We created socio-economic op... Read more 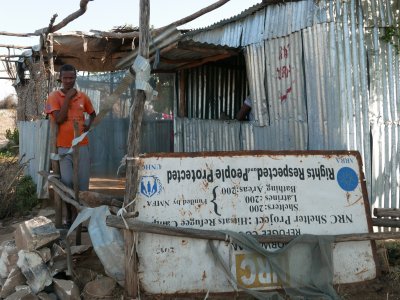 Eritrean refugees in Ethiopia—Caught between all fronts

Forced displacement in Ethiopia is a complex issue with, in part, contradictory trends. In 2018, when the Eritrean–Ethiopian peace agreement laid the foundation for opening borders and the Nobel Peace Prize, between one and three million people were displaced by inter-ethnic conflicts and violence in Ethiopia. At the same time, just one country in Africa, Uganda, is sheltering more refugees than Ethiopia does. According to UNHCR, 800,000 refugees and asylum seekers were registered in 2020, including just under 22,000 in the capital Addis Ababa (75 per cent Eritreans). They all profited from the relaxation of the once strict encampment policy in Ethiopia.

While the eyes of the world were on the US Presidential elections, an armed co... Read more 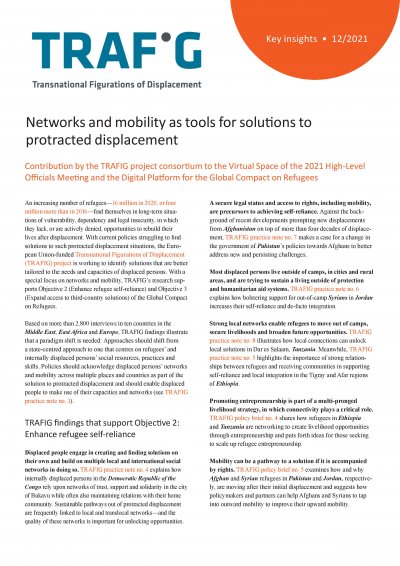 Networks and mobility as tools for solutions to protracted displacement

An increasing number of refugees – 16 million in 2020, or 4 million more than in 2016 – find themselves in long-term situations of vulnerability, dependency and legal insecurity, in which they lack, or are actively denied, opportunities to rebuild their lives after displacement. With current policies struggling to find solutions to such protracted displacement situations, TRAFIG is working to identify solutions that are better tailored to the needs and capacities of displaced persons. With a special focus on networks and mobility, TRAFIG’s research supports Objective 2 (Enhance refugee self-reliance) and Objective 3 (... Read more 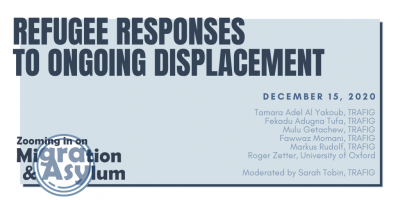 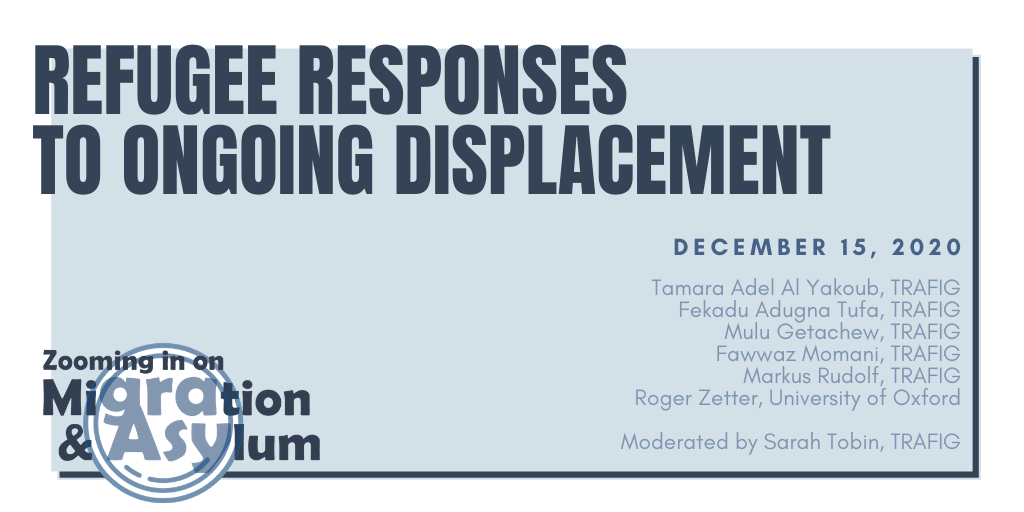 With continued record levels of displacement across the globe, solutions in the true sense of the word remain elusive for many. This webinar will explore different strategies that refugees and IDPs are using to respond to displacement-related challenges. Speakers will highlight examples of solutions found by those who are displaced themselves, based on field research in Ethiopia and Jordan. These often go beyond those commonly recognised, including strategies related to TRAFIG’s themes of connectivity and mobility. Speakers will also examine the global need for durable solutions and check in on the Global Compacts two years after their signing. 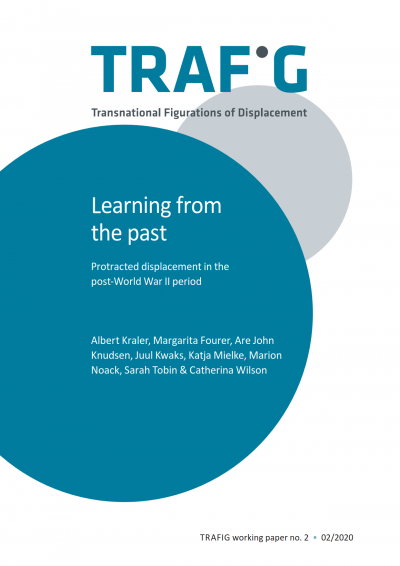 Learning from the past

This working paper examines the history of the search for solutions to protracted displacement. Focusing specifically on the Horn of Africa, East Africa, the Middle East and South Asia, the paper analyses past policy responses that explicitly or implicitly address situations of extended exile. In addition, the paper examines the potential of translocal mobility and connectivity as an individual- or household-level solution to displacement.

The concern to find solutions for long-term displacement situations has been a key driver for the evolution of the international refugee protection regime ever since its initiation in the interwar period. Yet, only more recently have these efforts crystallised around... Read more 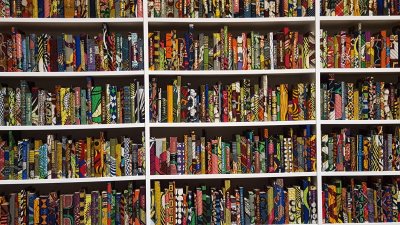 Protracted displacement in the Horn of Africa

This case study provides an overview on protracted displacement in the Horn of Africa and aims to uncover evidence on transnational and translocal connectivity and mobility of displaced populations in the region. This internal background document contributed to the formulation of TRAFIG Working Paper no. 2 “Learning from the past. Protracted displacement in the post-World War II period.” within TRAFIG Work Package 2: “Learning from the past”.

The objective of this case study is to review academic and literature issued by relevant actors in the field of protracted displacement such as international organisations, NGOs or governments to answer the questions whether and how transnational and translocal connectivity and mobility contributes to self-reliance and resilience of displaced pop... Read more 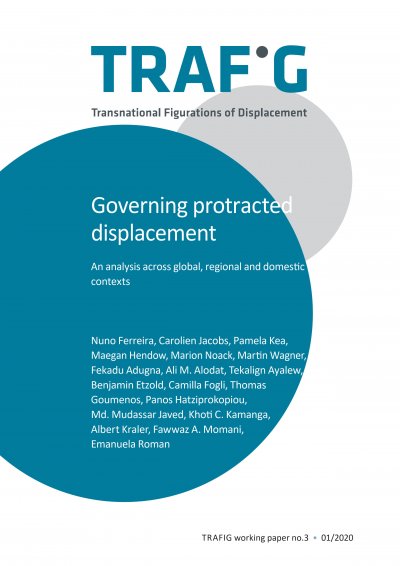 An analysis across global, regional and domestic contexts

This working paper explores the governance of protracted displacement across global, regional and domestic levels in the context of the project “Transnational Figurations of Displacement” (TRAFIG). The multiple contemporary crises that have led to forced displacement show not only the limits of a tight definition of ‘refugee’, but also highlight the gaps in international protection frameworks. A significant number of those forcibly displaced are in protracted displacement situations.

This paper is an effort to make sense of the legislative and policy frameworks of protection that apply globally, regionally and domestically, and the way in which these frameworks facilitate or hinder solutions... Read more 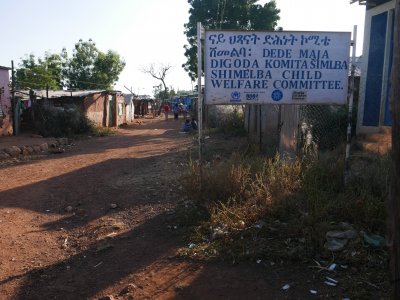 TRAFIG Fieldwork has started in Ethiopia

The Ethiopian research team started fieldwork in October 2019 in Addis Ababa among Eritrean refugees who are beneficiaries of the Ethiopian government’s Out of Camp Policy (OCP). In Addis Ababa the team undertook fieldwork in three localities: Gofa Mebrathayil, Hayahulet and Bole-Harabssa inhabited by refugees who spent long time en route and who arrived recently. Since mid-November 2019 the team members conducted fieldwork around the Ethiopia-Eritrea border. The team visited three refugee camps, all of them populated by Eritrean refugees, however with some striking differences. Firstly, Shimelba – a camp established in 2004 - has a population of which 70% belongs to the Kunama, a minority ethnic group in Eritrea. Most of the Kunama have spent mor... Read more