The Bosnian Canton Una-Sana at the European Union's external border is currently the end of the line for thousands of refugees. With the devastating fire in Camp Lipa just before Christmas, their already precarious situation has become even worse. Even though the humanitarian catastrophe at the border is currently generating a comparatively high interest of the media, no adequate and winterised accommodation for the displaced has yet been found. Despite the warnings of numerous human rights organisations, EU member states have not been able to bring themselves to grant displaced persons safe entry and an examination of their applications for asylum. Some 1,000 people are now living in the former Camp Lipa in winter without shelter, sufficient food, clothing and medical care- not to speak of the many hundreds of people in the ruins and woodlands around the two towns of Bihać and Velika Kladuša. This blog gives an insight into the situation there.

Una-Sana as a space of displacement

Una-Sana Canton is situated in the north-west of Bosnia and Herzegovina, in direct proximity to the Croatian border. The geographical closeness to the EU’s external border and the infrastructural connections make it an ideal starting point for the onward journey of many displaced people to the European Union. This is why the cities of Bihać and Velica Kladuša have been major transit points for refugees on their way to the European Union for several years. Due to the intensified border protection and the illegal push-backs of the Croatian border police, Una-Sana has also become a place where displaced people are forced to stay on. In this way, they are deprived of their chance and right to apply for asylum once they have crossed the border.

In the Canton, forced migrants can be found 1) in central, state-recognised camps, 2) in the periphery of the towns in larger mutually supportive groups in empty houses, industrial buildings, so-called squats or in wooded surroundings of the towns, so-called jungle camps, 3) in various localities in smaller mutually supportive groups in the immediate vicinity to the Croatian border (for instance just before they cross the border) or in some few cases 4) hidden in private houses by Bosnian citizens.

The freedom of movement of these forced migrants is extremely limited as a result of police repression by Bosnian authorities and their being moved to official and informal shelters. Besides police repression, lacking resources to meet (basic) needs and the numerous push-backs by Croatian border officials exacerbate this problem. 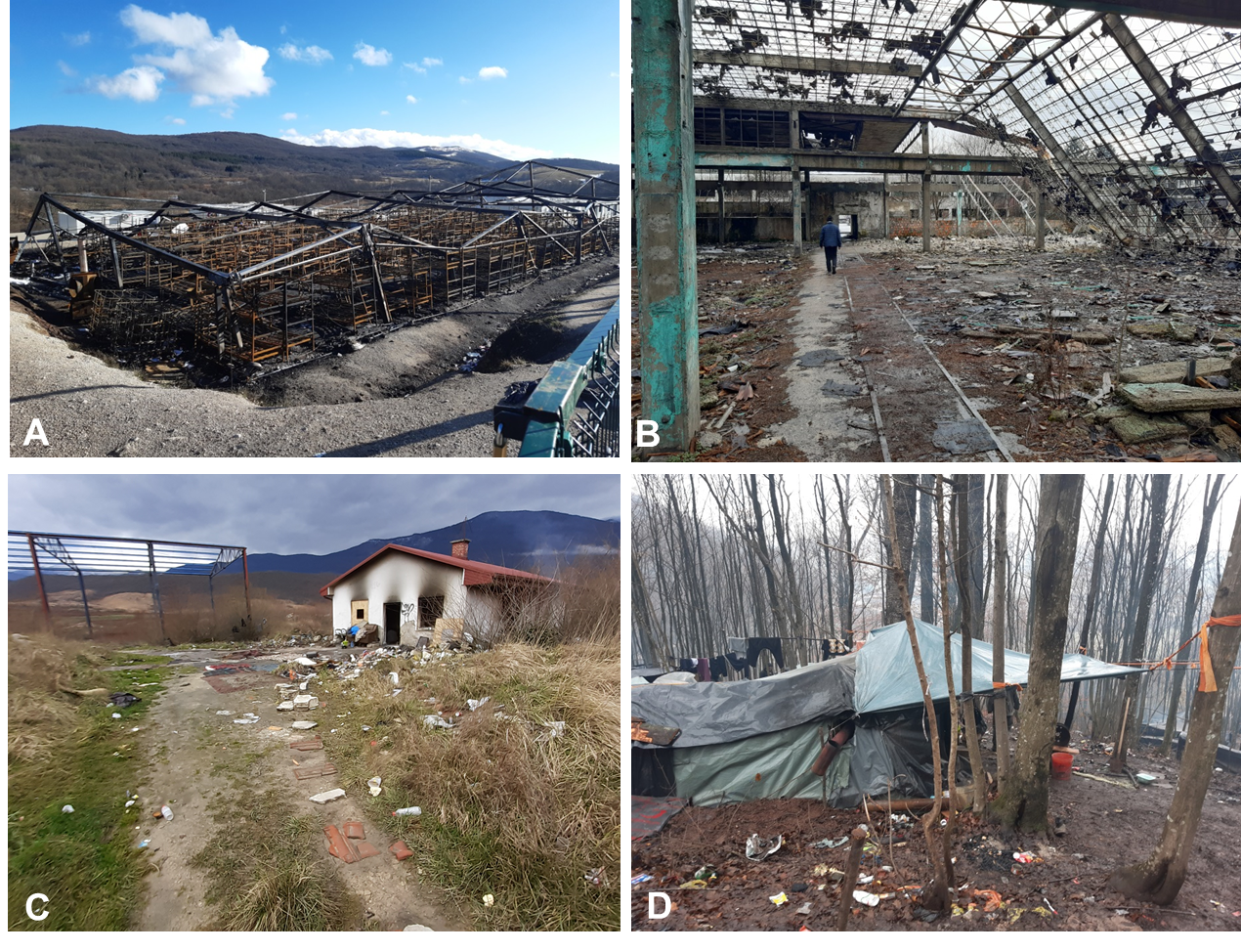 (Im)mobility between state-recognised camps, informal squats and the internalised external border of the European Union

In the burned-down Camp Lipa, the precarious living and weather conditions, the remoteness of the camp and lack of alternative housing have led to the fact that residents of the camp have nowhere to go and are increasingly isolated from the rest of the world. This manifests itself, for example, in the fact that some people no longer have the strength to walk longer distances in freezing temperatures and snowfall to change from one place to another or to run away from border police when trying to cross the border.

As the holding capacity of the few official camps in Una-Sana is not sufficient to accommodate all, an informal, highly makeshift housing infrastructure has developed in recent years. This includes empty and dilapidated factory halls or uninhabited houses, so-called squats, where refugees organise themselves in separate, autonomous mutually supportive groups. Depending on the size of the building and the season, several hundreds of individuals can live in different rooms and halls of a squat. The inhabitants of such squats are also subject to protracted immobilising forces, determined mainly by the precarious socio-economic living conditions and police repression.

Some refugees report, for instance, that because of arbitrary controls by Bosnian police officers, they cannot move in public spaces or along roads. They are often denied access to public facilities, supermarkets or hospitals. As a result, they generally only leave their informal housing when they intend to cross the border or when they go to get food at night, which is mainly distributed by (criminalised) volunteers. As most squats are in the immediate vicinity of the towns or even in the town centre, their inhabitants are evidently exposed to the permanent danger of being held by Bosnian police officers and deported to Camp Lipa, which is 25 km away even though there is no space for them.

The combination of police push-backs to the remote camp and being sent away by the camp authority forces refugees to involuntary mobility between official and informal housing infrastructure. Around the towns, they use a network of informal and memorised pathways:

Besides the policy of repression in the Una-Sana described above, refugees continue to be hindered in their movement in the Croatian border area. According to the displaced, the problem is not to cross the EU’s external border but to stay on the other side for good. The internalisation of the border seems to extend far into Croatia itself, where refugees are apprehended, deported and forced from the Schengen area back to Bosnia. In this context, many displaced persons report ‘chain push-backs’ with the informal cooperation of Italian, Slovenian and Croatian border officials. The descriptions of the at times violent push-backs are quite drastic in some cases.

Besides the violent assaults, some Croatian border officials seem to confiscate the personal belongings of the refugees:

These violent push backs by Croatian border officials and the taking away of personal items contribute greatly to the protracted immobilisation of forced migrants in Una-Sana. Under the precarious socio-economic conditions, it usually takes them some weeks or months to equip themselves for a new attempt at crossing the border. For instance, many reported that they have been stuck in Una-Sana for one to two years and were trying to cross and then to stay on the other side of the border every two months on average, weather permitting.

The findings from this field research indicate that the immobilisation of refugees and their precarious socio-economic living conditions in predominantly informal housing infrastructures is mainly caused by the EU border regime and respective state-organised orders of violence.

The field research took place in the framework of a cooperation with BICC and the TRAFIG project and the data collection for my Master’s thesis at the University of Bonn’s Geography Department between 29 December 2020 and 9 January 2021.The research was made possible by the German association "Kölner Spendenkonvoi e.V.".

The views and opinions expressed in this blog do not necessarily reflect the opinion of the TRAFIG Consortium or the European Commission (EC). TRAFIG is not responsible for any use that may be made of the information contained therein.

Considering kin and countrymen – challenges to social networks among Syrians in Tripoli, Lebanon

Since the 1990s, Youssef had earned a good living in Damascus. He and his brother owned a series of artisan workshops in addition to over 20 apartments that they rented out in a lo... Read more

Urban internally displaced persons in the Democratic Republic of the Congo

In the quest for sustainable solutions to record global displacement, promot... Read more

The Upward Spiral Towards Local Integration of IDPs: Agency and Economics in the Democratic Republic of the Congo