Considering kin and countrymen – challenges to social networks among Syrians in Tripoli, Lebanon

Since the 1990s, Youssef had earned a good living in Damascus. He and his brother owned a series of artisan workshops in addition to over 20 apartments that they rented out in a lower-income neighbourhood to the south of the city centre. He and his wife raised three boys and eight girls, four of whom had gotten married and were having children of their own before the Syrian crisis began in 2011. Nearly a decade later, Youssef, his wife, three of their children, and four grandchildren live together in a rented shop space in a peripheral neighbourhood in Tripoli. His family is split between Lebanon, Syria, Jordan and Germany. Of his six brothers, only one is still alive. Four of his sisters remained in Syria, and one moved with her husband to a street nearby in the same neighbourhood of Tripoli. Of his children, two of his daughters were widowed and he struggles to send them money back in Syria. In an attempt to rebuild his life in Syria, Youssef returned to his original neighbourhood in Damascus in 2019 – now under the control of the Syrian government. He returned to destroyed properties and a stolen car. With no reason to stay, he made his way back to Lebanon avoiding the formal border crossing in the process. By re-entering Lebanon illegally, he is now ineligible to renew his legal residency. He fears leaving his home, should he catch the eye of Lebanese security and be separated from his family.

Youssef’s story is not unusual in Tripoli. Tripoli is Lebanon’s second largest city with an estimated population of 508,000 people, nearly 20 per cent of whom are Syrians. The majority of Syrians arrived between 2012 and 2014 before the October 2014 “Policy Paper on Syrian Displacement”. The Policy went into force in January 2015, placing limitations on entry by Syrians into Lebanon, residency requirements and renewal as well as the ability to work. Collectively, these restrictions undermined the ability for Syrians to achieve any form of self-sufficiency. International support is facilitated through the Lebanese Crisis Response Plan drafted by the UNHCR in coordination with the Lebanese Ministries of Social Affairs and Education. On the local level, municipalities may provide for Syrians, but this is dependent on local support and solidarity – a feeling that has eroded overtime as ‘brothers’ have become ‘burden’. However, economic and social conditions for Syrians vary widely between municipalities. In some areas, host-community relations are relatively stable, such as Tyre, due to “stronger law enforcement, political parties, and municipalities”. In contrast, following the December 2020 murder of a Lebanese man reportedly by a Syrian in Bsharre, locals expelled several hundred Syrian families, many of whom moved to Tripoli. 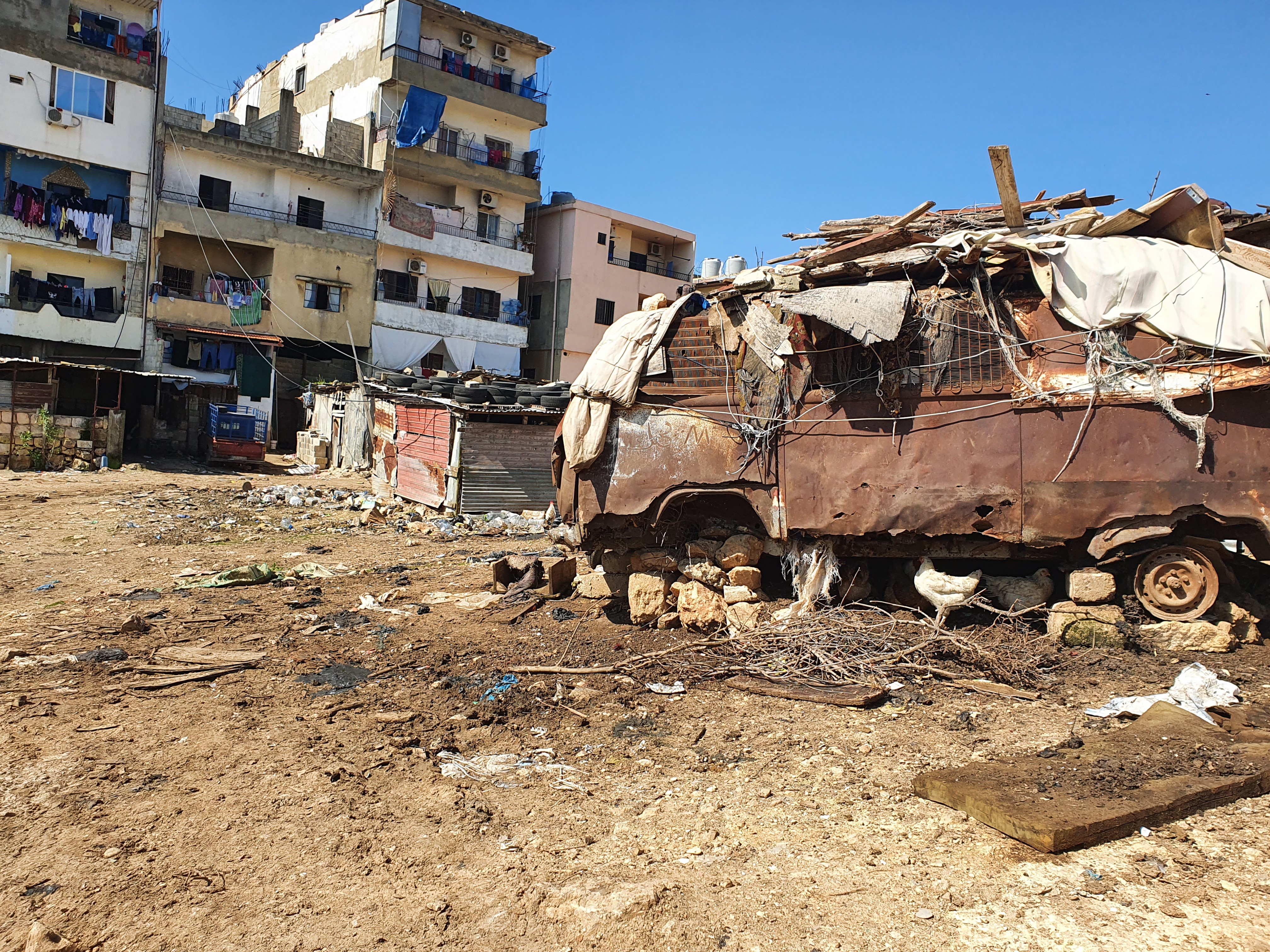 Proximity to Tripoli and access to the city made it the first choice for many displaced Syrian households, who did not consider other destinations. With close linkages to the Syrian cities of Aleppo, Homs and Hama, there was a large Syrian population in Tripoli before 2011. Labour migration routes between these areas date back to before the 1950s, and neighbourhood reports by UN-Habitat note that a large portion of Syrians present today had settled in Tripoli before 2011. (Syrians living in Tripoli’s neighbourhood before 2011 include 19.7% in al-Qubbeh and 16.4% in Bab al-Tabbaneh of contemporary surveyed populations).

Syrians worked and continue to work as day labours in construction and agriculture; as traders selling groceries, pets and other goods; or as skilled tradesmen including as pastry chefs and metal work. Due to labour restrictions after 2015, many Syrians are now relegated to work in the informal sector. Migratory and employment linkages are further supplemented by transnational family linkages and inter-marriage that are not uncommon among Syrians in Lebanon.

In February and March 2020, I interviewed 15 households in Tripoli’s predominantly low-income neighbourhoods of al-Qubbeh and Abu Samra, which have large Syrian populations, with the aim of investigating changes to social networks after nearly 10 years of displacement.

The interviews revealed that Syrians interact locally with key networks comprised of Syrian friends and family to a greater extent than with Lebanese hosts. As stated by an elderly Syrian in al-Shawk, an informal neighbourhood at the outskirts of Abu Samra, “there is respect among Syrians and Lebanese, but more respect among Syrians.” For several households, networks were limited to family or friends from their neighbourhoods or towns in Syria known before 2011. Occasionally, these circles were widened to include Syrian neighbours who were settled nearby. There is one primary exception: students interviewed reported having regular and amicable social relationships with Lebanese counterparts that they would meet during their studies or at the work. One student, Wasim, for example, revealed that many of his Lebanese friends and contacts were surprised to learn that he was Syrian, which he took as a sign of his integration and socialization into Lebanese society.

The interviews I conducted highlight that Syrian local relationships facilitate opportunities and information on housing, employment, and other prospects that arise in the absence of other means of coordination. In contrast to findings highlighting the role of borrowing and lending among Syrians as a primary driver for collective settlement, findings instead highlight the presence of an informal ‘economy of favours’ that provides a social infrastructure underpinning access to the informal economy.

Challenges to social networks in Tripoli

Tripoli’s strained labour market was discussed by my interviewees as a burden for many households. For example, husbands would spend long periods of time outside the house either working or alternatively looking for work, leaving family at home. One Syrian man in his mid-40s noted how he would rarely see his children as he worked long hours and would occasionally sleep in his taxi. Another interviewee in his early 30s explained to me that he moved his wife and child to another town were rent was cheaper and he had in-laws, while he remained in Tripoli to work and shared a flat with five other Syrian men. Although his free time was spent socially, the trip to visit his family on weekends had led to his detention on multiple occasions due to the lack of a residency permit. His detention would now preclude him from regularising his residency in Lebanon.

The need for reliable and affordable telecommunications is another source of strain on social networks. For the most precarious in Tripoli, selling or losing a phone, the inability to purchase credit, or changing a number meant others could no longer reach them. One interviewee in his mid-30s, for example, noted how he had to repeatedly change his number after the relationship with his employer had become a danger to his family. Others reported the inability to find time to call family, which left social networks unattended and strained.

Others noted the emergence of new forms of social discord in the form of gossip among family members and Syrian neighbours. One woman in her early 30s noted how gossip meant that she was no longer close to some of her family who had also settled in Tripoli. Harassment featured as another form of discord often between refugee and host communities. An interviewee in his early 40s explained how his family was targeted following a work dispute which led him to resettle them outside of the city. Another family reported moving to a new apartment because of harassment targeting their daughters by the customers at a recently opened café. Harassment is a primary threat limiting movement (for example visits to the city markets), with few interviewees noting a means of redress. As noted by a young man in his early 30s in al-Shawk: “we solve problems among ourselves”. Even interviewees with legal residency noted how Lebanese authorities were often unable to help them overcome security problems and would encouraged them to negotiate with their harassers.

Urban settlement, according to scholarly literature, is often touted as a means through which refugees and the displaced may integrate themselves into national economies and become self-sufficient. Studies have also highlighted that urban refugees are among the most vulnerable, but vulnerability manifests in different ways in different cities. From these interviews, it became evident that Syrians in Tripoli experienced unfavourable power dynamics, perpetuated by a lack of minimal rights protections and poverty, which reinforce in-group networks with others in similar circumstances.

Some Syrians I interviewed discussed a desire to use social networks for onward migration. All had family members abroad in Jordan – and many also had family in Europe, North America or Turkey. Interviewees regularly discussed seeking means to emigrate through family reunification programmes or employment by relatives, while others sought advice related to emigration procedures from family and friends abroad. Few households reported receiving remittances from relatives abroad in the last few years, and if they did, payments were ad hoc, consisted of small sums (US $50-200) or were received for earmarked purposes, such as tuition.

Emigration was a topic of conversation among most households. Although for many families visa restrictions to preferred destinations (Europe, Canada, Australia) meant that resettlement relied on UN agencies. A few households were interviewed by the UNHCR and relevant embassies and received the offer to emigrate through resettlement. However, some Syrians I spoke with had turned down the offers. This was due to perceptions that onward migration may have negative impacts on their family, whether it was the fear of raising their children in an unknown culture; that children may be taken away by protective services due to household violence; or that emigration would result in ‘abandoning’ some family members in Lebanon who would not be entitled to join in resettlement (unmarried men).

Thus, a large number of Syrians are likely to stay in Tripoli, utilizing their social networks as best as they can to access local labour markets and housing. While future prospects for onward migration may rely upon transnational ties, local networks can also reinforce immobility as well as isolation from the host community. This makes the so-called durable solutions out of protracted displacement of (1) voluntary returns in safety and dignity; (2) local integration; or (3) resettlement to another location or country difficult to envision. As summarised by one interviewee: “There is no other choice, no other way, no other country to live in except Lebanon.”

_Robert Forster is a PhD Fellow at the Christian Michelsen Institute (CMI) in Bergen, Norway, researching urban displacement movements in Lebanon. Robert is conducting research on social networks among Syrian displaced in Tripoli, Lebanon, for the TRAFIG Project as a member of the Jordan country team.

The views and opinions expressed in this blog do not necessarily reflect the opinion of the TRAFIG Consortium or the European Commission (EC). TRAFIG is not responsible for any use that may be made of the information contained therein. _

Key results and reflections from the TRAFIG project have just been published in a special issue in the Journal of Ethnic a... Read more

In the shoes of a Congolese refugee:

The Common European Asylum System prohibits the mobility of persons entitled to international protection within the European Union, making it more difficult for displaced persons to rebuild their lives even after arriving in Europe and receiving protection status. Recent developments soften this strict policy of immobility for some. In this context, intra-EU mobility based on refugees’ skills could become a game-changer. The tools are there. What is needed now is to connect these initiatives so that more displaced persons can use their skills for their benefit and that of receiving countries. Read more